Julie Lynn Evans, one of the UK’s foremost psychotherapists, has concerns that smartphones may be harmful to the mental health of children.

“With a smartphone – as opposed to an earlier generation of “brick” mobiles that could only be used to keep in touch with worried parents – youngsters can now, she says, “access the internet without adult supervision in parks, on street, wherever they are, and then they can go anywhere. So there are difficult chat rooms, self-harming websites, anorexia websites, pornography, and a whole invisible world of dark places. In real life, we travel with our children. When they are connected via their smartphone to the web, they usually travel alone”.

Wondering if the producers and providers of these gadgets, the big hardware brands, can produce toy-versions that won’t run, won’t display, won’t deliver harmful content to children. We already have toy-cars, toy-planes and toy-guns for children and that’s fine, I guess… Why not toy-phones? Why isn’t there any big brand offering a kids safe data protocol for online communication?

We know that the adult industry has a fair and effective self-regulation level. This may serve as a starter for engineering a new generation of toy-phones. And since the big corps are in constant search for new markets, what a bonanza to sell ‘crippled’ low-end chips in novel fancy cases for kids, labeling them SAFE and all that. A win-win-win situation: companies making more money; mothers sleeping better; adults living happier in their ecosystems.

“When they are 15, you don’t, for example, let them go to pub, or stay out in the local park at four in morning, yet they’ll get into much less trouble physically there than they will on their smartphones on the internet. I’m not talking about paedophiles preying on them. I’m talking about anorexia sites and sites where they will be bullied.” That is where the damage is being done to their mental health, she argues.

The doctors provide the facts they’re having to deal with in the real world. Accidental porn watching is not a top scare because life is so much more than sex. Mobile devices (technology for adults) in the hands of children (anytime, anywhere) prove to be detrimental to a harmonious mental development – just like giving them the keys of the car or a gun. There are reasons for the ‘invention’ of the driver’s license or the gun permit. Why a smartphone, capable to induce long term mental damage to minors, is handled with nonchalance as a birthday present? Isn’t this device a tool (weapon?) too powerful for the little one?

If Google, Apple, Samsung and other smartphone-gods would consider creating the ‘kidsafephone’ from its inner core up to its outer shape (hardware, software and marketing all new) then the politicians might have to look elsewhere for scapegoating.

LoyalFans is the social media hub where I am at liberty. 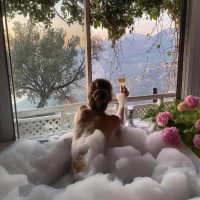 Our journey as a couple through love, sensuality and spirituality

Forty Something Life As We Know It

Life is a journey

Love of the written word